Earlier this week, Enclave Magazine published my personality profile of Ricardo Rosselló, current governor of Puerto Rico. Personality profiles of politicians are useful to statesmen, diplomats, businessmen, and the common folk. My analysis thus belongs to the toolkit of those who seek to understand politics.

In a nutshell, I argued that the current governor of Puerto Rico is not, and never was, worthy of holding that office — or any public office. He was all along underachieving, mediocre, amoral, and incompetent, projecting himself as a decent, smart, educated young man. (He turned 40 on last March.) The recent leak of some of Rosselló’s private conversations with his staffers, publicists and allies showed his true colors. The leaked conversations unmasked him, showing a corrupt, serial offender, who has been scheming all along to abuse his power by attacking opponents and members of his own party.

The conversations also show that Governor Rosselló has been spending public monies on publicists and political operatives, in order to advance his personal and partisan agenda, while manipulating public opinion through misinformation, trolls, demagogy, and threats of violence. Under Puerto Rico law, that is unauthorized and illegal, and reason enough to impeach Rosselló, and remove him from office. Hence, it is reason enough for him to resign. To add insult to injury, the leaked conversations also revealed that Rosselló is a vulgar, callous, ungentlemanly excuse of a human being.

From wealthy parents, the Governor belongs to a ruling and social elite. The ranks of that group include entities who have been wreaking havoc for decades now. Many of them are greedy, rapacious, elitist, mediocre, disconnected from their fellow Puerto Ricans, and oblivious to the island’s rich culture. In contrast, close to 100 percent of our singers, musicians, scholars, scientists, engineers and educators come from the middle and lower classes, raised outside the San Juan metroplex, and mostly educated in the island’s public schools, the same that the current administration is decimating and closing.

Many of these high-society fellows are strangers in their own land, while raising their children to feel superior, and entitled. Their offspring thus frequently turn out to be the worst that Puerto Rican society produces, given their ignorance, amorality, sense of entitlement and contempt for everything good and for every fellow human being who shows them up by being decent, talented and intellectual.

The worst elements of these riffraff often enter the political arena and become public officials. The leaked conversations merely confirm what many of us knew all along: that these fellows are corrupt, vindictive, overbearing, inexperienced, and inept, despite their elite education and upbringing — or precisely because of it. Many in Puerto Rico are calling them la manada (“the pack,” as in a wolf pack), because they have always been part of a rapacious, destructive, tight-knit group of wannabe oligarchs, who hate everything and everyone good and decent, and who were never capable of using at least a fraction of their wealth toward the betterment of their country.

That rancid subgroup of the mainly San Juan-Guaynabo elite has kept together, for several decades now, an ungodly alliance with a second tier of opportunists and cronies. That alliance currently controls the two parties which have alternated power in Puerto Rico since 1969. I sustain that the extreme version of that clique is to be found in the pro-statehood party, the Partido Nuevo Progresista (New Progressive Party, or PNP).

In 1969, with the PNP gaining access to the governorship for the first time ever (until 1973), ominous vices began to show up: partisan patronage, malfeasance, ineptitude, and greed. The new incumbents were the proverbial children in a candy store. The second PNP administration of Governor Carlos Romero Barceló (1977-1985) was mainly characterized by political persecution, with an intelligence division within the Police Department going to the extremes of planting bombs, orchestrating plots, infiltrating political and youth organizations with undercover agents and informants, and even perpetrating the murder of two young men, including a cover-up that was dashed in 1983 by a legislative investigation.

With the PNP administration of Governor Pedro Rosselló (1993-2001), corruption went from the exception to a generalized modus operandi. The gathering storm became stronger with the collapse of the island’s economic model and the increase of its public debt. Little did we know that our fragile situation would become outright despair.

When Ricardo Rosselló took his oath of office in January, 2017, many of us grasped the horror of having in office the wrong person at the wrong time. The situation was already dire, with an inept predecessor, a government in financial and operational ruin, and a ballooning debt of close to 80 billion dollars. Then there was a Congressionally-mandated Fiscal Control Board, with an austerity agenda that, if fully implemented, will make the island totally unviable.

On September 20, 2017, Hurricane María struck the island. The monster took its time, staying over the island for close to 18 hours. Its enormous size made sure that each section of the island felt all its intensity, for all those horrific hours. The resulting devastation has been well-documented. As it turned out, the response of the administration of Ricardo Rosselló was, not working toward the Island’s recovery, but using the devastation as an opportunity to funnel money into a few hands. On July 17, 2019, Puerto Rico’s Centro de Periodismo Investigativo (Center for Investigative Journalism, or CPI) revealed that the scheme had begun even before the hurricane, and was orchestrated from the Governor’s Executive Mansion. The degree of perfidy and shamelessness revealed by the CPI is the culmination of the corruption that escalated under the administration of the current Governor’s own father, former Governor Pedro Rosselló. Quite a dynasty. 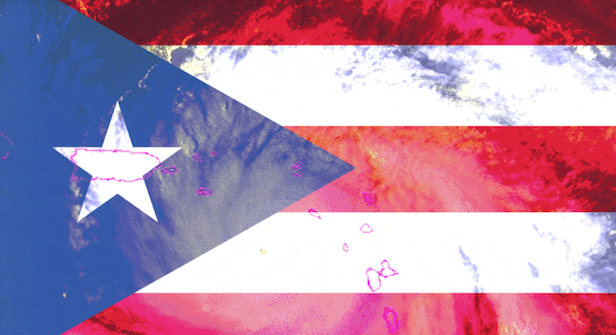 On Tuesday, Governor Rosselló held his second press conference in six days. Far from beginning to mend his tarnished image, Rosselló again showed in that appearance that he is unable to see the writing on the wall; that he is blind to the realities of his moral turpitude, and of the impossibility of him fulfilling the responsibilities of his position until the expiration of his term on January 2, 2021. As I write this article, the island has been paralyzed by the scandal of his moral turpitude and his concomitant unfitness to stay in office.

Before announcing that his ambition was to become governor, Rosselló had a very limited labor history, and no accomplishments. But he was oblivious to his lack of intellect, knowledge, and experience. He merely felt entitled to hold the highest office on the island, even though he sported no credentials — whether impressive or otherwise minimally qualifying — to hold any office, much less governor of Puerto Rico. Now, he is oblivious to his utter absence of political capital.

On Wednesday, close to 100,000 fed-up Puerto Ricans gathered in Old San Juan, demanding, again, Rosselló’s resignation. The Governor has been left alone, with no support from his own party. Even his fellow alumni of the Colegio Marista, the prep school he attended in Puerto Rico, asked him to resign.

Why is Rosselló clinging to his position? I propose that the key to the answer lies in his narcissism. In essence, narcissists live in a world created by their distorted minds, in which they bask in their grandiosity and dreams of glory. It was Rosselló’s fantasy to conceive himself worthy of being governor. That is the root of this Gordian Knot: although he is not psychotic, he is divorced from crucial aspects of reality, while the demands for his resignation make him more determined to hold on.

Think of a motion picture, set in the time of Julius Caesar. Imagine that, one hour into the movie, an airplane appears, lands, and Caesar is shown leaving the plane. Shocked, the audience would recoil in horror, and the movie would flop. The mind of Rosselló created a rigid world. He is incapable of conceiving the relevance or the reality of everything that, like an airplane in ancient Rome, is foreign to his inner, fantastic world. His mind recoils from the obliteration of a universe in which he clings to his sense of grandiosity and indispensability. In Doctor Post’s words, he is unable to fathom, or endure, “the breakdown of [his] narcissistic defensive armor.”

Meanwhile, Puerto Rico keeps paying for his cretinism, and that of his fellow travelers. Once out, their unholy pack must not be allowed to regain access to the island’s beleaguered institutions. The decent PNP supporters, who amount to hundreds of thousands, are also to answer that call.

Arrogant, vain, egocentric, extremely ambitious, entitled to succeed and to be followed by throngs of admirers, the narcissist believes that he is a very special person; he is full of himself. The narcissist’s surface grandiosity overlays great insecurity. Frustrated dreams of glory have been associated with violent adventures and mass movements of hatred. The breakdown of the narcissistic defensive armor leads to psychosis.

For those Puerto Ricans who want profound changes, the challenges ahead are formidable.

Hector chats with Xavi Burgos Peña, former editor of La Respuesta, an online magazine by and

Roberto Ariel Fernández holds a Master in Laws Degree from The George Washington University Law School. He is the author of six law journal articles about constitutional issues, including the Puerto Rican colonial history. His 2004 book, El constitucionalismo y la encerrona colonial de Puerto Rico, is available at the libraries of Princeton and Yale University.

If it's all over, then what?
A new study shows that many Americans are "drawn to ‘chaos incitement’"
You know the truth. Let's all stop denying it
Why I read the news at ease these days
A white guy with a gun and an agenda is a lot
Go to Top