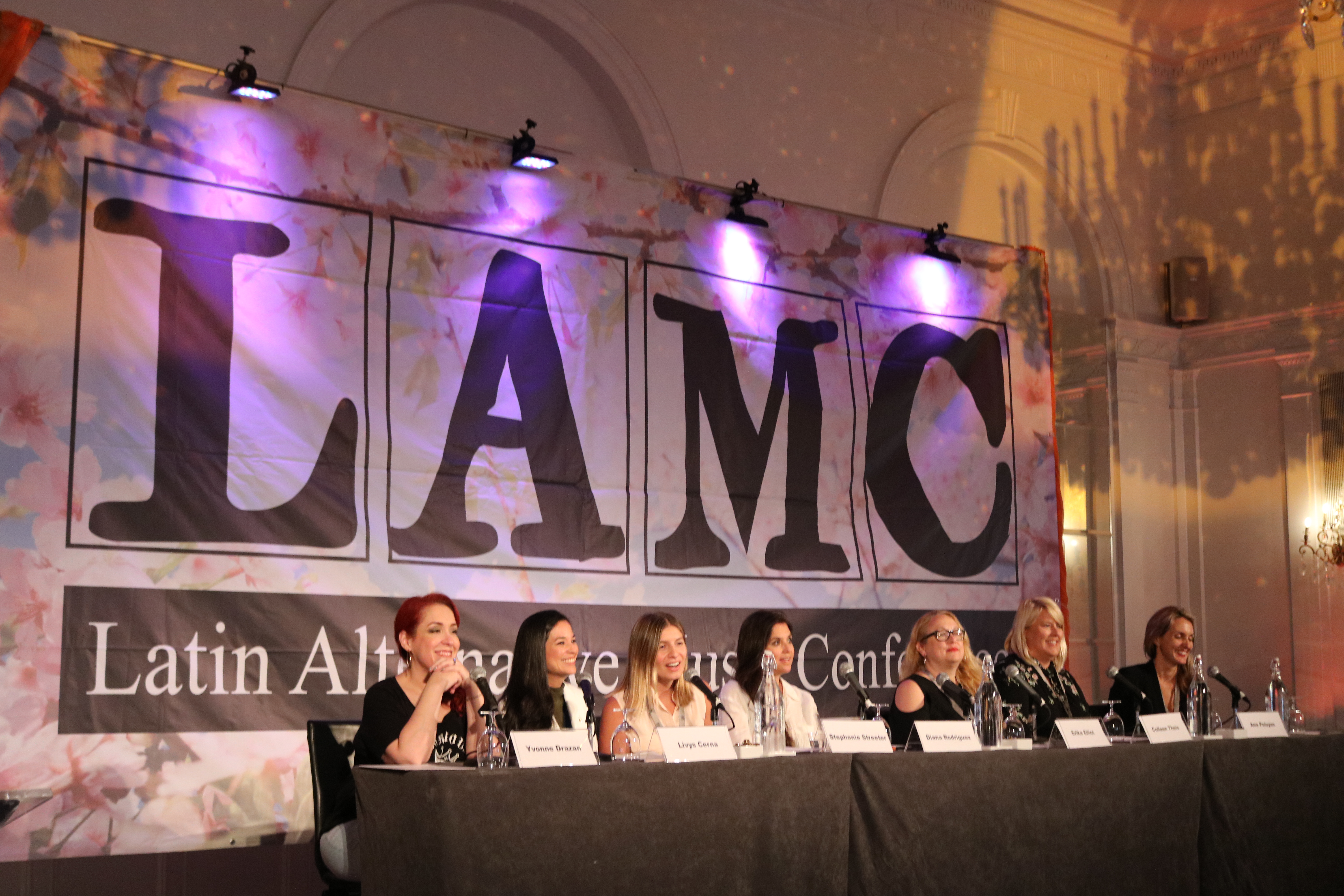 Representing diverse industry backgrounds, working in publishing, production, management, promotion, booking and copyright, they all had a universal message. “Anyone that wants to grow their career, my advise is the work harder and be entrepreneurial; create your own work,” said Collen Theis. Addressing the stagnation and institutionalized sexism, the executives across the table agreed that it is imperative to be creative and ambitious. However, the gender bias and Latin music fragmentation may make it harder for women to move ahead. Although some companies value diversity, purposely fostering female talent, the industry still remains a grueling competition to arrive at the executive levels. “You have to have a level of fearlessness about yourself and be very self-aware of where you are in your career. Being comfortable in a position is not an option,” said, Yvonne Drazan.

Hard work and fearlessness are the driving force building careers for women. Networking and building fair representation are crucial to fight institutionalized sexism at the staff and executive levels. “I found other women to mentor me and inspire me to work with,” said Erika Elliot. In contrast, Ana Poluyan, President of the Asociación Argentina de Managers Musicales (ACMMA) explains that in Argentina there are many female managers, but she’s the only board member. “That marks the difference between this society and Latin America. In terms of programming it becomes a problem because there aren’t enough female artists. The question is, if there aren’t enough female artists, is it because there’s no talent or is it because there aren’t opportunities for development?” added Poluyan.

In response the female artistic representation, “we’ve seen a small increase in gender balance in festival line ups,” said Stephanie Streetcar. However, a recent Pitchfork article on gender reveals a gender imbalance in most festival lineups: “Only a quarter of artists booked across 23 of the summer’s biggest fests were female or groups with at least one female member.” The study shows a female representation increase from 14-19%. The disparity crosses over into mainstream. A new study led by Stacy L. Smith, an associate professor at the University of Southern California and the founder of its Annenberg Inclusion Initiative, found that of 1,239 performing artists, 22.4 percent of them were women.

What remains a dilemma is the revenue stream; tickets and merchandizing sales. Included in the schedule was a an all-female line-up for the “LAMC Celebrate Brooklyn! Show at Prospect Park Bandshell” with performances by:

Mala Rodriguez, Ana Tijoux, and Girl Ultra. Although free, the panelists used this as an example of programming excellence; one that should be emulated by all music festivals across the globe. They also noted that, had the showcase required tickets, more than likely audiences would’ve been financially responsive.

In short, the industry leaders’ called for cultivation, and promotion of female artists.

The collision between ticket sales vs. female empowerment becomes apparent in genres like reggaeton, as noted by an audience member during the Q&A. The man asked who’s responsible to change this, to an all-female panel. Dealing with oppressive and sexualized depictions, it was acknowledged that the genre’s lyrical content may be demeaning to women, even though it continues to grow as the biggest genre in the world. The debate went on to determine who’s responsible for overly sexualized, and oppressive depictions of women in music.  “I do disagree in principle about what you’re asking. It’s not just our responsibility to fix society. It is as much responsibility of those artists, those managers, those voices. We also need to think about the context and the presumption that it is our responsibility, because for me that’s part of the culture of men saying whatever they want, but women should not be ok with it. But maybe men should not be ok with it either; maybe they should stop,” added Elliot. Lyvis Cerna suggested a gender-balanced representation of reggaeton, if more female performers would become members of the recording academy.

What the future holds for producers and executives fostering female talent includes: more financial backing, awareness of diversity and creative voices, and taking risks. “We need to listen to the female artists about what they want to do and not be told ‘you need to say this or you need to wear that.’ We need to ask: ‘who do you want to be?, what do you want to do? And, how can I help you get there?’,” culminated Theis. Aside of the supply and demand, and the numbers game in the business, it requires a high level of tolerance for risks. It’s time to take those risks on women in Latin music.

Trump's tweets mean nothing to his fans

Let’s Do This With Music: New Beginnings Playlist

Hard work and fearlessness are the driving force building careers for women. … More