Doreen Montalvo is, by all means, a legendary performer. The Broadway icon shares her inimitable talent on stage and on screen. In fact, it was recently announced that Doreen Montalvo will head from the ensemble into the spotlight in On Your Feet!. The original cast member will now assume the role of Gloria Fajardo—Gloria Estefan’s mother—replacing Andréa Burns, who will play her final performance at the Marquis Theatre on February 5. If that’s not all, she’s an  original cast member of the Tony Award winning In The Heights, performing as the Bolero Singer as well as understudying the roles of Daniela, Camila, and Abuela Claudia respectively.  She also is a recipient of 2007 Drama Desk award for best ensemble. A veteran of musical theater Doreen has toured the country in the First National tour of Flashdance the Musical in the role of Louise. She starred in such productions as West Side Story (Anita), Man of La Mancha (Aldonza), Nunsense (Sr. Hubert), and Sweet Charity (Nicky).

Doreen is best known for her cabaret concerts. Her iconic voice has entertained fans in South America, the Caribbean, Mexico, and up and down The Mississippi River. One of her most sought out shows is  called Ladies Night, performed in cabarets all around New York City with many guest stars.

Now, the time has come for our Puerto Rican award-winning triple threat to present her latinidad to the world in her debut solo album: American Soul/ Latin Heart. While she’s proudly represented her heritage in theater productions such as: Cubamor,  Havana Under The Sea, and La Lupe, My Life, My Destiny, she finally takes her Latin heart to the recording studio and gifts her audience with true American soul. 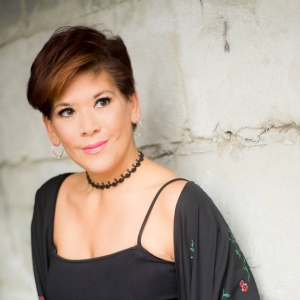 I briefly spoke with her regarding her inspiration for this formidable album:

Marlena Fitzpatrick: You worked with the incredibly talented musical director, Jaime Lozano. Did he make all the arrangements?

Doreen Montalvo: Yes my dear friend is Jaime Lozano wrote all the amazing arrangements on this album and co-produced with me.

MF: That’s legendary! It stayed in the Broadway family. And speaking of Broadway, Who raps on ’Te Soñé’?

DM: The incredibly talented friend and star of Hamilton for Javier Muñoz.

MF: This is a bilingual album where you seamlessly move between Spanish and English, particularly with ’Total Eclipse of the Heart,’ by Jim Steinman and ‘Bésame Mucho’ by Consuelito Velázquez. Is this representative of your American soul Latin heart and why?

DM: I have always loved classic rock songs and the love of Latin music instilled by my parents. I wanted to fuse my love of both genres with the music that stirs my heart and soul.

MF: Interesting! It’s all about keeping it personal. Now, you go from ‘What a Wonderful World’ by Louis Armstrong in salsa to a jazz and choir rendition of ‘Piece of My Heart,’ by Janis Joplin. How was the process of selecting this repertoire? Why these recording artists/ composers?

DM: As a singer, I’ve always loved different styles of music.  These were some of my favorite songs that have touched my heart and soul in one way or another. I wrote the Spanish lyrics to ‘Angel de mi alma’ based on the American song ‘Angel of the Morning’ by Chip Taylor. And that song sparked the idea for the entire album. It was after I worked with Jaime on his musical ‘Children of Salt’ that I knew he would be the one to collaborate with on this project. It took 7 years since he went to Mexico for a few years so we recorded via Skype. All instruments were recorded live in Mexico and I recorded the vocals here I was New York City.

MF: WOW! Should we look forward to an all salsa Spanish album?

DM: Anything is possible!

MF: We all look forward to that! Congratulations on a formidable album and all your well-deserved success.

Doreen Montalvo will host her concert and album release party: 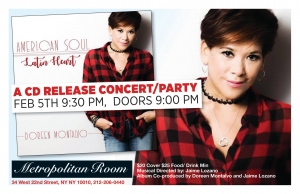 Some thoughts on Spanish music, Spanish names, and Latino discrimination against Afro-Latinos