If there’s a Secret Society worth joining and becoming a proud card-carrying member, it’s the one lead by composer and self-proclaimed ringleader Darcy James Argue. The Brooklyn-based immigrant artist has been leaving his sonic fingerprint all over the world alongside his co-conspirators: an 18-piece postmodern ensemble. His take on jazz and music theater has garnered him three Grammy nominations, including a Best Large Jazz Ensemble Album for his latest landmark masterpiece, Real Enemies.

The album explores the politics of paranoia and conspiracy theories in American culture. Although composed and recorded before the 2016 election cycle, this multimedia project darts at the center of our current political environment and divisive discourse. Darcy James Argue‘s brilliance rests on his ability to create thought-provoking, body- jolting, zenith-reaching art, while redefining protest music. In his quest to put forward an innovative body of work that reflects on a post-truth America, he erases cultural boundaries and offers his hand in solidarity to marginalized communities, especially the Dreamers movement.

Ahead of his February 3rd concert at Columbia University’s Miller Theatre, Darcy James Argue discusses the Latin infusion on Real Enemies, his solidarity with immigrants, and the act of resistance. 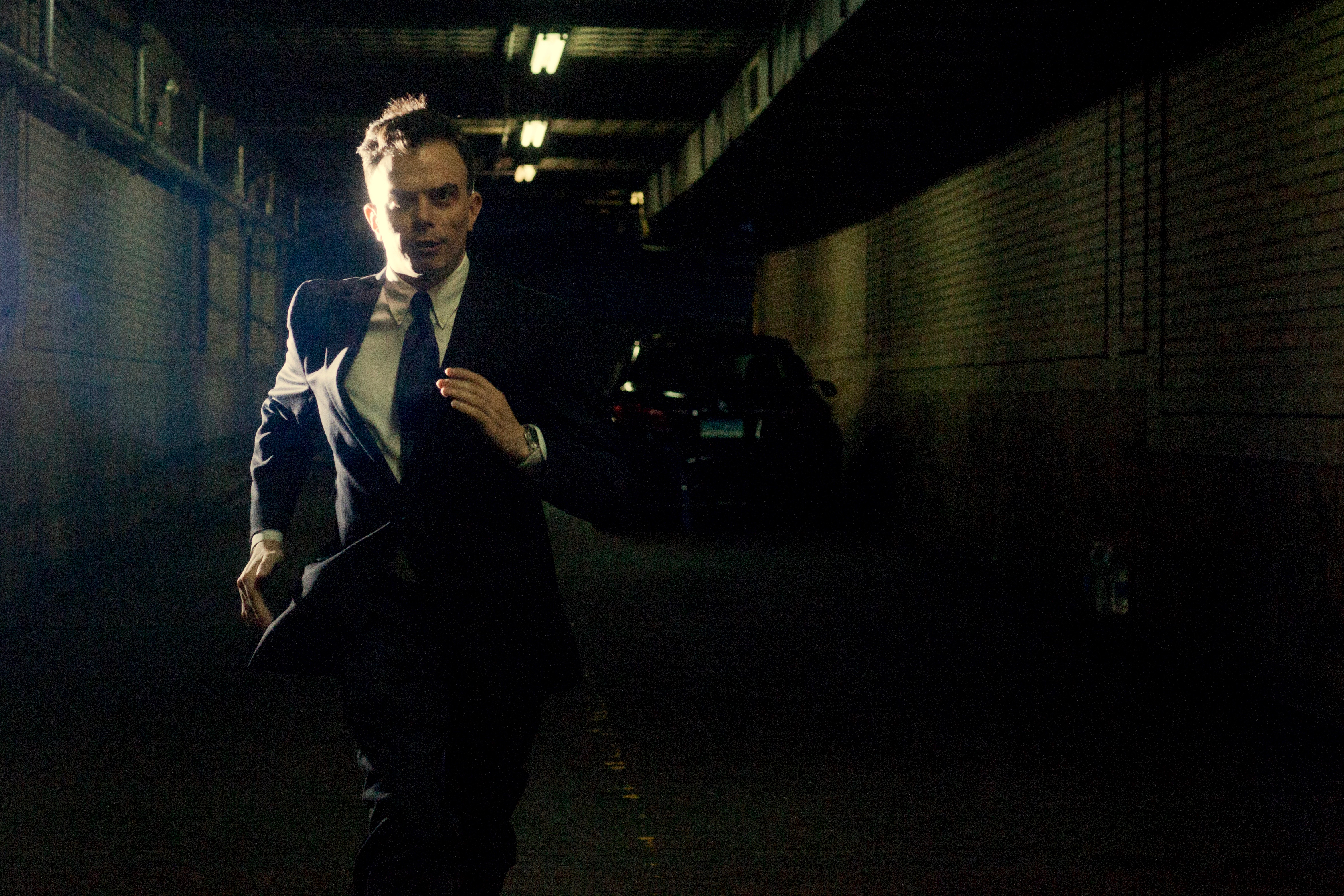 Marlena Fitzpatrick: Before we talk about the album, you were quoted stating:  “Jazz is protest music.” Could you explain what you mean about that?

Darcy James Argue: It is protest music just by its very nature; by the fact that jazz is a historically black art form, made by musicians who had to contend with institutional racism all their lives. There’s a particular history and it says something politically even if the music itself is not overtly political. Obviously, different musicians throughout jazz history have had different ways of negotiating a world that is filled with white supremacy. So, you have musicians like Charles Mingus, who was more explicit about the politics of the art. There were other musicians who by simply making the best music they could, by standing for artistic values in producing art that’s meaningful and lasting, were also making a very strong statement coming from a community that was not accorded any kind of equal standing in America, and still isn’t.

MF: And we’ll continue to fight to achieve that equal standing. Now, protest music is sometimes categorized as a genre by itself but these instrumental distinctions need to be made, especially when these pieces are in solidarity. This brings me to my favorite tune of your album: Dark Alliance. Being, Puerto Rican, of course, it made me dance. However, it also made me think of the opium of the masses; the value of entertainment. We’re talking about conspiracy theories, entertainment and how media masks the truth. What’s the purpose of the Latin flavor of the middle section?

DJA: The middle section, which is a Nicaraguan song with a Cuban groove interpreted by many different communities in Latin America, is based on a particular recording by Luis Enrique Mejía Godoy “Un Son Para Mi Pueblo.” He and his brother Carlos were instrumental in the protest movement in Nicaragua and were active in the revolution to overthrow Somoza. This song was from this album of the same name and was put out in the wake of the Sandinista revolution. It was kind of this national unity band. He had members of the group who had been actual revolutionary freedom fighters and others who were members of the national symphony orchestra. It is a very optimistic gesture of healing that he embedded in the ensemble of this group and the lyrics itself. I received Luis Enrique’s permission to paraphrase this song on the album. I wanted to use something authentic from Nicaraguan culture to represent the Nicaraguan revolution in music and the perceived threat that revolution posed to American security interests at the time. Anyone who followed politics in the eighties is probably aware of the Iran- Contra scandal. I was looking for a way to represent that history in music and it seemed that this landmark recording was a good place to start. It’s just a wonderful tune. I’m glad that, even though it’s a serious subject, in the music there’s some joy.

MF: Ironically, many times Somoza was compared to Reagan. I think there’s also something very prophetic about the tune and your entire album. To me it was a rear view mirror to that era. We’re kind of going back there. In addition, you have Nancy Reagan’s voice endorsing the war on drugs, which have crippled Latin America. That brings me to Casus Belli, the Afro-Cuban tune. What inspired you to write this piece?

DJA: Anyone that’s familiar with specifically the history of Afro-Cuban jazz knows about Machito, who’s an important Cuban-American bandleader. He and his big band made an important recording with Charlie Parker. Machito’s band was in residence at this resort in upstate New York called “The Concord.”  They produced an album called The Vacation at the Concord, which was more of an advertisement of the resort and poolside activities. The context for Casus Belli – which was the “just cause” for war- is this memo that was declassified in the early 2000’s called: Operation Northwoods. It’s something that people have suspected for a long time. It was a plan by the joint chiefs under Kennedy to fabricate a Casus Belli that would give them a pretext to invade Cuba. A lot of the military of the Kennedy’s administration thought they should launch a full-scale military invasion of Cuba. What they envisioned was blowing up a civilian airliner over Cuba and blaming Fidel Castro. To be fair, I guess, they were going to take the passengers out of the airline first before shooting it down. Still, they were going to present this to the world as this atrocity that Castro was responsible for, therefore they had no choice but to invade. World opinion would prevent a reaction from the Soviet Union. With this tune I envisioned the members of the joint chiefs taking a vacation at the Concord, sitting by the pool and drinking banana daiquiris listening to Machito’s band as they were plotting Operation Northwoods. Hopefully, it comes across as a sincere tribute to Machito, an amazing figure in Afro-Cuban jazz.

MF: Well, not only the music is joyful, it preserves a wicked sense of humor. I can see them stopping their military tactics brainstorming session to order a third daiquiri and maybe do a little dance. Speaking about misdirected anger, and misleading rhetoric, you’re known for being a passionate immigrant supporter, especially the Dreamers movement. Do you consider your albums solidarity pieces for immigrants?

DJA: As we’re having this conversation, the Senate Democrats caved on their defense of the Dreamers. There was a government shutdown. They said they wouldn’t reopen unless Dreamers were protected; they made a promise and they broke it. That’s incredibly disappointing, especially given the widespread support that Dreamers have. The fact that the Trump administration took it away for no reason, purely to use it as a political leverage against his enemies is disgusting. I hope that something can be done because if it’s not restored people’s lives will be wrecked. I must say, I’m an immigrant; I’m Canadian. As a white Canadian immigrant I have a lot of privilege. I do, however, have some understanding of what the immigration process is like, having gone through it myself. It’s incredibly time consuming and painful, even for someone like me. So, for someone less privileged it is exponentially worse. I try to do what I can to, for instance, call my Senator and urge them to support Dreamers on this issue. Immigrant issues have popped up in my work from time to time. I co-created Brooklyn Babylon with Croatian-born visual artist Danijel Zezelj and that was explicitly an immigrant fable: a grandfather and a granddaughter fleeing their country and coming to Brooklyn to seek refuge which is a story we see everyday on the streets here. There’s some resonance to that for me. In fact, I’m in the very early stages of a new project that will deal with immigration and immigrant rights; who gets to count as a citizen. Those are some of the issues I’ll be addressing in an upcoming multimedia work.

MF: Wow! Great question: who counts as a citizen? As a Puerto Rican myself, I’d dare to say Puerto Ricans- on the island and the Diaspora- are realizing who the real enemy is thanks to this particular issue. We have USA citizenship, but that’s where it ends. We’re aware of our “passport privilege,” but we do go through the marginalizing issues Dreamers and other communities endure everyday. I’m telling you this, because this is why the album resonated with me. Your art not only made me dance, but reflect. More importantly, it inspired me to take action. That grants the question, how influential is art, particularly music, in triggering political and social change?

DJA: On Election Day 2016, I was outside of the country. I stayed up until 6:00 am watching the horror unfold. The next day I had to go to a rehearsal at the conservatory with young musicians from all over the world that were part of this ensemble that I was conducting. I felt I had to say something, so I spoke a little bit about how there’s no sugar-coating it: there are dark days ahead, not only for America but for the world. But it’s our responsibility as artists, not just to respond artistically, but to also provide a measure of inspiration to the act of resistance.

MF: Love that! “provide a measure of inspiration to the act of resistance.” Thank you so much for your work and passionate solidarity.

February 3: Darcy James Argue’s Secret Society at Miller Theatre: Composer/bandleader Darcy James Argue and his innovative 18-piece big band Secret Society will perform rarities and unrecorded works as well as the piece Tensile Curves, which was written in honor of, and performed at, Newport’s 60th anniversary in 2014. Argue describes the work as a 40-minute meditation on Duke Ellington’s Diminuendo and Crescendo in Blue, the performance of which famously caused utter pandemonium at the 1956 Newport Jazz Festival.

"Apart from music and in a broader sense, I'm convinced the more we learn and get

The album is a new fusion of classical and modern jazz orchestra music.