At the height of anti-immigration politics and in the midst of Puerto Rico’s economic crisis a group of top-tier artists, under the collective Cosa Nuestra, will come together through the sound of the drum to redefine what it means to be Latino.

Spanish for “Our thing,” Cosa Nuestra, a name inspired by the legendary salsa master Willie Colon’s album as part of Fania All-Stars, is more than a collective. Cosa Nuestra is a traveling global movement that uses art, culture, and cuisine to bring Latin culture to life from its genesis and transform the current conversation around Latinos. This year’s interpretation of the collective’s New York City event is a night paced to the rhythm of the drum in celebration of Afro-Latinos.

“The drum is the pulse of our culture and it unites all of our people regardless of where we come from.” Manolo López, founder of the collective says. “Since slave times, the instrument has been a symbol of liberation, and we’re using it to liberate ourselves from anti-Latino rhetoric and reshape how we are viewed.”

On Saturday April 22, 2017 a bill of world-class talent will ignite a movement by re-claiming their roots and paying homage to the drum. The immersive, soul-shaking experience will be held at one of Greenpoint’s newest venues–Dobbin Street. Famed New York born Puerto Rican Poet and actor Flaco Navaja, will narrate the show taking participants on a journey through the history of the drum. Starting in Africa, where the drum was born, and traveling to Latin America and New York City, the birthplace of Salsa music, Navaja’s storytelling will be laced with musical performances by Ilu Aye, IFÉ and ÊMINA.

A hand-picked all-star lineup of the City’s top salsa musicians will participate in an orchestrated jam session, reminiscent of the Fania All-Star days, to close out the event. Tracks by DJ Christian Martir, from Sociedad Records, will accompany all performances. 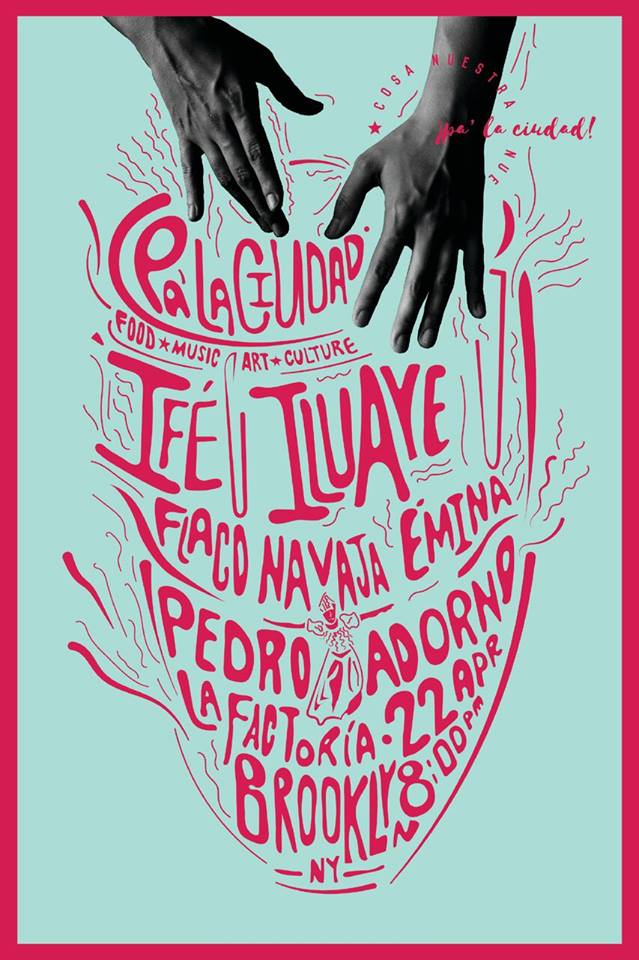 Vanguard cocktails will be mixed by Leslie Cofresi and Roberto Berdecia, mixologists at award-winning San Juan based cocktail bar La Factoria and Puerto Rican culinary delicacies will be prepared by a host of critically acclaimed Puerto Rican chefs in New York City and Puerto Rico. They’ll also be a visual component to offer an alternative interactive journey.

“We carefully selected the talent to reflect the many different faces and expressions of the drum,” Tita Garcia, co-curator of the event, says, “Bomba, Plena, and Rumba will be accompanied by dancers to reflect the call and response effect that the drum generates.”

Originally a Puerto Rican born and raised concept, Cosa Nuestra is establishing the newest rendition of their event as a launching point for their travelling pan-latin platform, made possible, in part by a partnership with Red Bull.

“We are far richer than the current rhetoric portraying Latinos will have you believe,” López says. “By coming together, we are elevating our culture and we are proving that.”

Cosa Nuestra is sure to provide an unforgettable experience that you’ll want to be a part of. Stay tuned for more information about the next Cosa Nuestra NYC 2017 event, an exclusive invite-only Almuerzo en el Campo, or farm to table meal this summer.