Caridad De La Luz “La Bruja” returns with a new one woman, semi-autobiographical performance, breaking personal boundaries with comedic confessional storytelling. Bringing to life the hilarious stories of her religious yet racist grandmother who was a devout Catholic that practiced Santeria on the side and her sexually fluid father who took over her radio podcast to talk about his most homosexual moment, Caridad reveals the funniest moments of her formative years. Her colorful cast of characters paint portraits, showing how Caridad’s alter ego “La Bruja” (the witch) was born, all in a scandalous and comedic context forming the ultimate Bru-Ha-Ha. Sprinkled throughout are outrageous insights, ridiculous exaggerations and bold-faced lies; taking the audience on a ride of wonder, laughter and surprise… Backed by The Brujalicious Quintet! 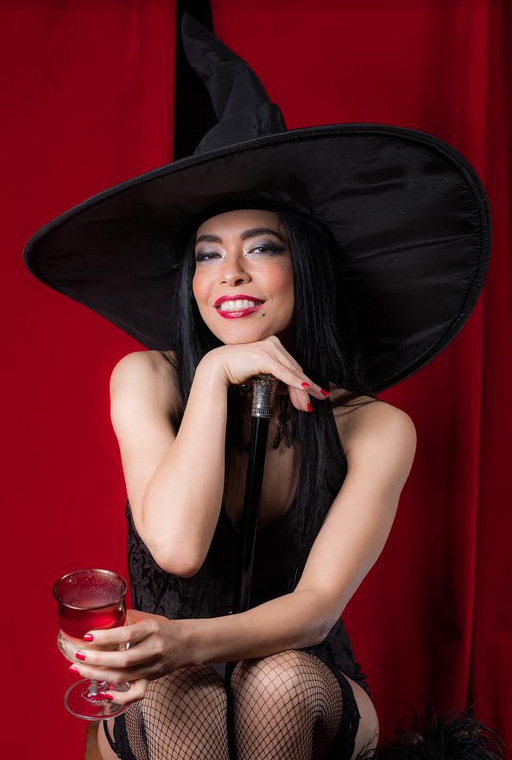 Comedy is not new to her work. She appeared in the movie El Vacilon, a Spanish comedy based on the radio show created by Luis Jimenez in 2010. She co-hosts a radio show with Sixto Ramos, Director of The Bru-Ha-Ha. Her album Brujalicious (iTunes and Spotify) has comedic interludes and funny hip hop punch lines. Her first one woman show, Boogie Rican Blvd. was comedic though it touched on very serious topics such as teen pregnancy, homophobia, drug abuse and abandonment.

The Bru-Ha-Ha showcases an ambience of classic cabaret, including the delicious food and beverages a cafe or restaurant would have. Aside of  music,  comedy,  and the  sensual aura a grand piano evokes, there will be Cocotaso Coquito- a secret family recipe only those who purchase a full VIP table will enjoy.

Caridad De La Luz is a Bronx-born performer known as LA BRUJA who is currently a co-host on the Luis Jimenez radio network for The Say It with Sixto Show created by
friend and director, Sixto Ramos. She performed in the successful Off-Broadway musical I LIKE IT LIKE THAT as China Rodriguez alongside Tito Nieves and Domingo Quiñones. She is considered one of America’s leading spoken word poets and was named one of the Top 20 Puerto Rican Women Everyone Should Know. Caridad was
also awarded the Puerto Rican Women Legacy Award, The Edgar Allan Poe Award for excellence in writing from The Bronx Historical Society and has been titled a Bronx Living Legend along with a Citation of Merit by the Bronx Borough President. She was has performed in venues such as The Apollo, Lincoln Center and in venues internationally over her 21-year trajectory since her debut performance in the famed Nuyorican Poets Café in 1996.  N.Y. Times called her “Juggernaut” after the run of her musical Boogie Rican Blvd., and was awarded Best Musical with Pregones and their 2015 production of Betsy where she played the title role. Her acting career has taken her from the stage to film: appearing in numerous movies including Bamboozled, Down to the Bone, El Vacilon de la Mañana and Gun Hill Road.  She crossed over as a recording artist with her Latin Hip Hop albums “Brujalicious”; and “For Witch It Stands” which are both on Spotify and iTunes.  Her poetry is featured on Prince Royce’s award-winning album “Phase II” and she became most known for her captivating performance on Russell Simmons; HBO Def Poetry Jam. As a teaching artist, Caridad has worked throughout the country facilitating poetry and performance workshops for countless aspiring writers of all ages.

Singer-songwriters Caloncho and Carlos Sadness have teamed up to produce a musical and tropical tribute, of sorts, to fruit. Wait, … More

The Capitalist Hurricane in Puerto Rico